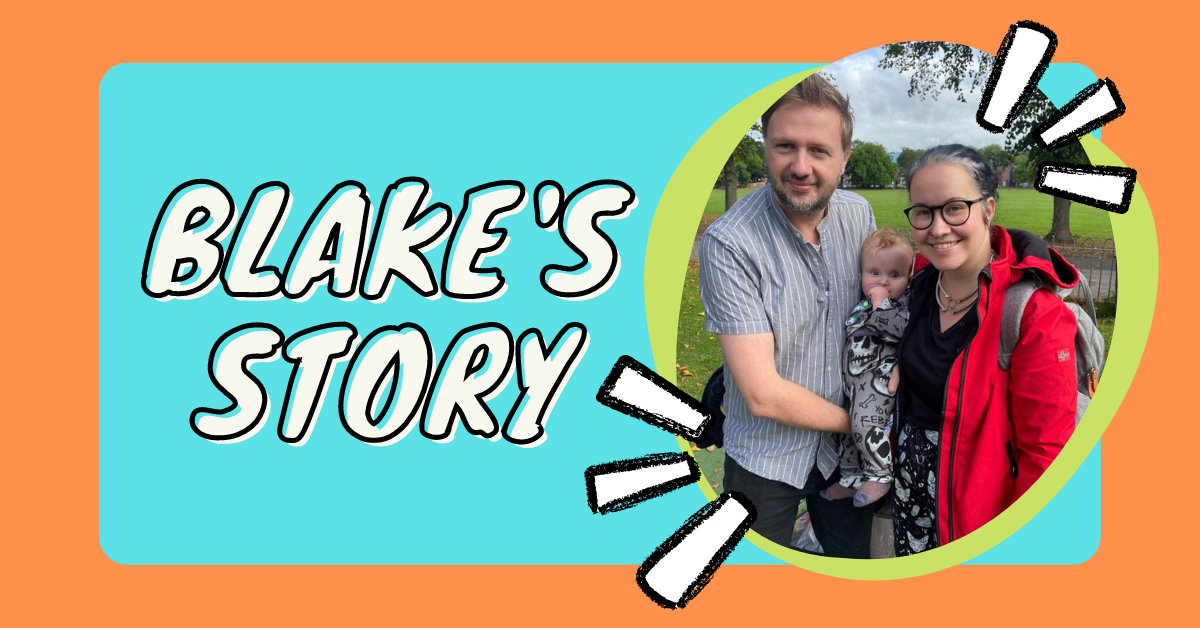 Amy, James and Blake are a SHASBAH family who joined us about a year ago. They’re now familiar faces and we’ve loved getting to know them! They wanted to share their story of having a baby with spina bifida, in order to raise awareness of their experience.

Blake’s mum, Amy, was pregnant in 2020. It was a really hard pregnancy, full of worries and scares. On top of that, dad James was unable to go to any antenatal appointments due to Covid restrictions. They booked a private scan at 16 weeks so that they could both attend. At this scan, the doctors gave them the news that baby Blake had spina bifida. Their advice was to terminate the pregnancy, leaving Amy and James heartbroken and reeling, mainly by the lack of care shown to them.

With this upsetting news and a distinct lack of support or options from the hospital, Amy and James started to do their own research. They discovered a new antenatal surgery and found that they were eligible for it. The surgery was only available in London and Belgium. Amy and James pushed for a referral from their doctors and travelled to Belgium for the procedure – the first family in Sheffield to do so. Thankfully, this medical team treated them with dignity and care. The surgery successfully closed the opening in Blake’s spine while he was still in the womb! Blake eventually made his arrival at 36 weeks in January 2021. Amy and James named him after the surgeon who had believed in him and given him a chance at life.

After Blake was born, there were countless appointments to attend. It was a busy and isolating time – partly because the pandemic prevented family and friends from visiting, partly because some people didn’t know what to say or how to treat them and partly because the newborn experience was so different from other people’s. Amy and James joined some online communities of parents of children with spina bifida. It was good to know that they weren’t alone, but there was still a lot of comparison between different situations and different children, which became unhelpful. It was difficult to build meaningful relationships online and so they weren’t able to get much support.

In the summer of 2021, a physio reminded Amy about SHASBAH, who support local people with spina bifida and hydrocephalus. Their family began coming to our regular groups and were able to meet face-to-face with other families. It was so refreshing for them to build proper relationships with other parents and to meet children in person who had the same condition as Blake. The SHASBAH playgroups quickly became part of their weekly routine. They were able to socialise with people who understood their situation and what they were going through, who also had appointments and medical care to deal with. They could take comfort in the fact that Blake would grow up knowing that he’s not the only person with spina bifida and hydrocephalus. All of this made them feel much less isolated in their lives.

In October 2021, the family were able to travel to Belgium so that their surgeon could meet Blake (pictured below). It was the first time that he’d met any of the babies he’d operated operated on! The trip brought helpful closure on a very traumatic time in their lives. They had come out of the other side with their precious son thriving and well.

Blake is now 18 months old. He had a shunt fitted when he was one, which means there are fewer specialists to see regularly. He’s seeing a physiotherapist to help him start walking. Amy’s gone back to work as a midwife, although she’s changed her schedule to fit around SHASBAH’s groups. Amy and James feel they can cope with caring for Blake and his needs – it’s part of their routine, although it’s taken a long time to get there.

We think Amy, James and Blake are amazing. They’ve been on a tough journey and they want to make sure that other families don’t have to go it alone in future. We’re so happy they found SHASBAH because that’s our mission too.

If your child has a diagnosis of spina bifida and/or hydrocephalus, please get in touch with us! We’d love to support you, whether it’s by talking about your experiences, meeting other children with spina bifida/hydrocephalus or pointing you to other great professionals and organisations.

Beth is our Communications Coordinator. She started working for SHASBAH in September 2020. Beth writes blog posts and newsletters, updates social media, sends out birthday cards and more. She loves being able to use her creative side for a really worthwhile cause. Outside of work, she enjoys gardening, cooking and going for walks with friends.

During the November lockdown, one of our members, Julie, got in touch for help. Like…

Making A Difference: The Story of the Little Red Trike

This little red trike has been on a big journey! Many years ago, some clever…

Making A Difference: Socialising During Lockdown

This is the first post in a new series, called Making A Difference. We'll be…

Find us on:
Latest News
Get to know us

This website uses cookies to improve your experience while you navigate through the website. Out of these cookies, the cookies that are categorized as necessary are stored on your browser as they are essential for the working of basic functionalities of the website. We also use third-party cookies that help us analyze and understand how you use this website. These cookies will be stored in your browser only with your consent. You also have the option to opt-out of these cookies. But opting out of some of these cookies may have an effect on your browsing experience.
Necessary Always Enabled
Necessary cookies are absolutely essential for the website to function properly. This category only includes cookies that ensures basic functionalities and security features of the website. These cookies do not store any personal information.
Non-necessary
Any cookies that may not be particularly necessary for the website to function and is used specifically to collect user personal data via analytics, ads, other embedded contents are termed as non-necessary cookies. It is mandatory to procure user consent prior to running these cookies on your website.
SAVE & ACCEPT
Skip to content